Carbon Monoxide Safety Although the popularity of carbon monoxide (CO) alarms has been growing in recent years, it cannot be assumed that everyone is familiar with the hazards of carbon monoxide poisoning in the home. Often called the silent killer, carbon monoxide is an invisible, odorless, colorless gas created when fuels (such as gasoline, wood, coal, natural gas, propane, oil, and methane) burn incompletely. In the home, heating and cooking equipment that burn fuel are potential sources of carbon monoxide. Vehicles or generators running in an attached garage can also produce dangerous levels of carbon monoxide. Facts & figures • The dangers of CO exposure depend on a number of variables, including the victim's health and activity level. Infants, pregnant women, and people with physical conditions that limit their body's ability to use oxygen (i.e. emphysema, asthma, heart disease) can be more severely affected by lower concentrations of CO than healthy adults would be. • A person can be poisoned by a small amount of CO over a longer period of time or by a large amount of CO over a shorter amount of time. • In 2005, U.S. fire departments responded to an estimated 61,100 non-fire CO incidents in which carbon monoxide was found, or an average of seven such calls per hour. The number of incidents increased 18 percent from 51,700 incidents reported in 2003. This increase is most likely due to the increased use of CO detectors, which alert people to the presence of CO. Carbon monoxide detectors should be mounted on the wall lower than smoke detectors. If your carbon monoxide detector should alert or sound, you and everyone should exit the residence and call 911 to have the fire department respond. You may not notice any symptoms or be feeling badly right away, but it is imperative to remove yourself from any potential hazards. Carbon monoxide detectors can be purchased for a minimal price at local hardware stores and Walmart, etc. For more information, please contact the Ocean Pines Volunteer Fire Department at 410-641-8272. 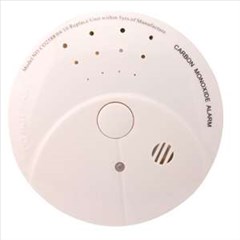