At 10:04pm on Saturday, November 28, 2020, the Ocean Pines Vol. Fire Department was alerted for a vehicle fire. As units were responding, dispatch advised that the vehicle on fire was in close proximity to a house and was the result of fireworks. Engine 1101 was first on scene and advised incoming units of a vehicle with light smoke showing and passed command to Chief Grunewald upon his arrival. Crews made contact with the home and vehicle owner and discovered that they had attempted to self extinguish the fire prior to our arrival. A 1 3/4 inch front bumper line was deployed to finish extinguishing the fire in the vehicle's engine compartment. A thermal imaging camera was used to check for hot spots in the vehicle as well as along the front of the home's garage, as the vehicle fire caused some of the siding to melt.

From conversations with the homeowner, it was learned that they were shooting fireworks in the street earlier that evening and once finished, they moved the remnants to the ground in front of their vehicle. A little while later, a neighbor alerted the homeowner to the vehicle fire in their driveway, and 911 was called.

Due to the nature of the incident, the on call Worcester County Fire Marshal was requested and upon their arrival, the scene was turned over for further investigation.

WC Deputy Fire Marshal Korb reminds residents that "Worcester County only allows ground based sparking devices that are not allowed to shoot higher than 12 feet in the air". Additionally, please see the Maryland State Fire Marshals Firework Safety guide below and note that used fireworks should always be soaked in a bucket of water. 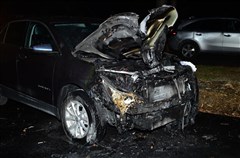 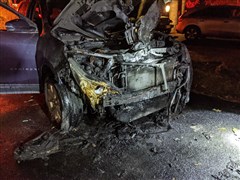 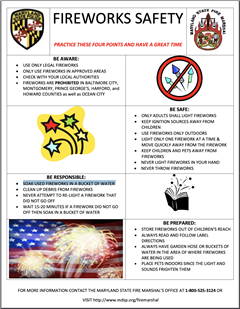